One thing where Google Ads excel is taking away your money by driving shitty traffic through its Display Network. What’s more Google makes it increasingly difficult to get rid of this garbage. This new script will help you minimize bad placements in Google Display Network and will save you tons of your marketing dollars especially if your accounts generate small number of conversions and you cannot afford to run tCPA bidding. The configuration of this script is a bit longer process but it’s definitely worth it. 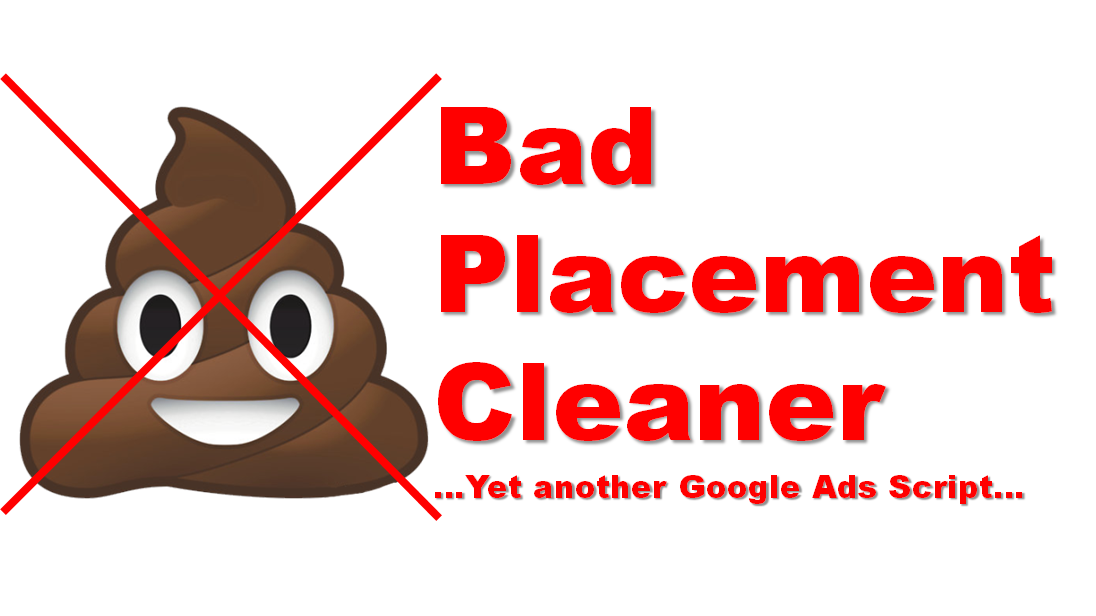 The Idea Behind Bad Placement Cleaner

There are 4 areas which I’m trying to solve:

If you are asking yourself any of these “how-to” questions then Bad Placement Cleaner help you:

It would not be Google if there weren’t some serious limitations. Generally speaking, I’ve tried to implement everything which was possible to implement but the following items are still a problem:

Since the script is the most complicated beast I’ve ever created, you should know what’s actually happening when you run the thing. Here are the simplified steps.

Here is a video of the script in action:

Step 1: Setup of the Config Sheet

Unlike with my previous scripts where the configuration is done in the script itself, this mega script has a dedicated config spreadsheet which looks like this: 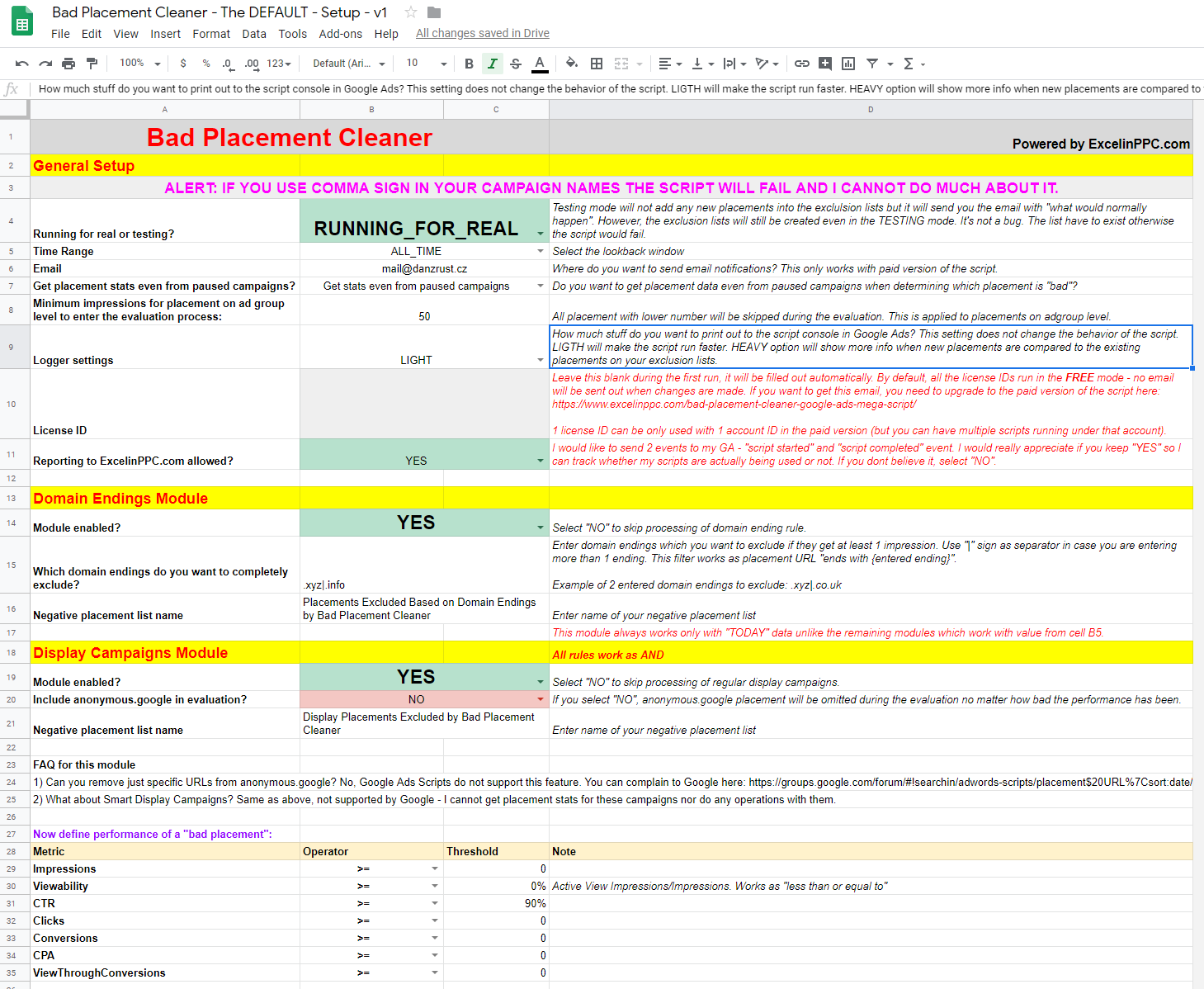 You go basically row by row and enter your values/make selections. If you are not sure what any of the rows is doing, you can read the note in the D column.

When you run the script for the first time, do not fill in the license ID – it will get filled automatically during the first run.

The script has 4 modules. Module is basically a huge chunk of code which is or is not executed based on your settings in “Module enabled?” option. So for example, if you select “Yes” in Display Campaigns Module, it means the script will process your display campaign placements and add exclusions in case bad placements are found.

The best practice is to enable only the modules which you really need as the script will run faster.

Obviously, the most important part for each module is the threshold definition. All the rules work on AND basis you still need to setup a threshold even for the metrics which you really don’t care about. See the following samples below.

So again, keep in mind that all metrics work on AND basis so even if you are interested only in 1 one metric, the remaining metric still need to fit into the rule. Here are my samples.

I want to exclude all placements ending with “.xyz”:

I want to exclude all placements ending with “.xyz” OR with “.info”:

I want to exclude all Display placements which have CTR above 90%: 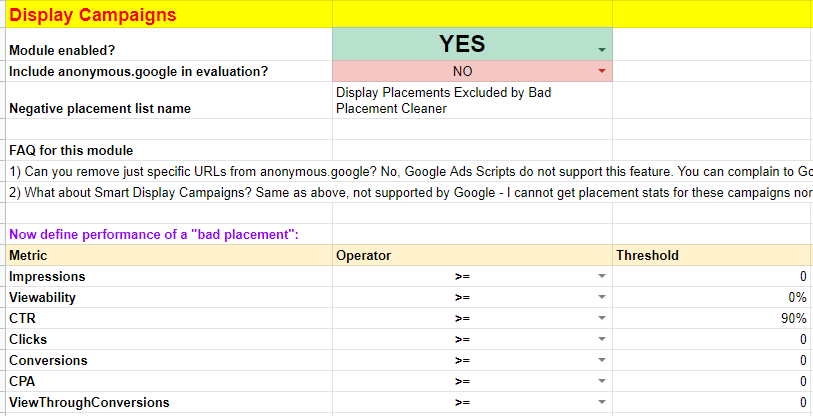 I want to exclude all Apps as soon as they get 1 impression:

In this case, I set Impressions >= 1% and I keep the other metrics as >=0 since that filter will be always true.

I want to run 2 different rules based on combination of multiple metrics inside 1 module:

E.g. you want to run exclusion based CTR > 90% as one check and then you want to exclude Display placements based on a combination of Cost and CPA. In this case, you will have to setup 2 config sheets and run 2 instances of this script in Google Ads – each script pointing to a different config sheet.

Step 2: Setup of the Script

You have to start by downloading either the free or paid version from this page.

Once your config spreadsheet is ready, you need to enter the spreadsheet ID into the script itself: 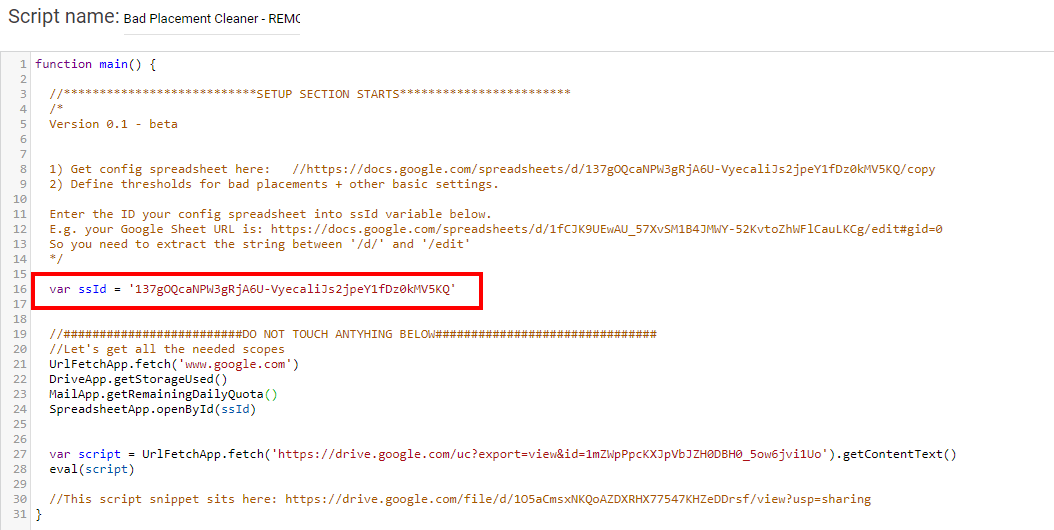 This is the only edit you have to do in the script itself.

After the script finishes running, you need to go to the shared library in Google Ads and locate the 3 new placement exclusion lists.  You should see the placements there and the assigned campaigns.

Alternatively, you can go to your config spreadsheet and checkout these helper sheets:

Those will show you the “bad placements” which were just added into the exclusion lists.

This script is fairly complex project with many variables. It’s possible you’ll get an error which I’ve never seen before. You can send me an email to mail@danzrust.cz and I will look into to. In an ideal world, you attach the copy of your log from the script console in the Google Ads.

One of the errors you can encounter and which I cannot really fix is the cell limit in Google Sheets. I’m using the config spreadsheet as a place where I process all the raw data. The cell count limit for each spreadsheet is 5,000,000 cells. So if your account is huge, the script may fail. In this case the solution is to:

Unfortunately, I cannot easily tell how many rows will be returned in the placement report so I (=the script) cannot act accordingly.

If you are unhappy with the results, you can easily revert. Go to shared library in your Google Ads account, find the exclusion lists, remove all campaigns from them and then delete the lists.

Sheet ID XYZ Does Not Exist

Another error I’ve seen during the development process was “Sheet ID XYZ does not exists”. I do not know why it’s happening but re-running the script always helped.

Script is Timing Out

Your account is too big so try a shorter date range OR higher minimum impressions threshold.

Getting a License for Paid Version

The email is listing all the changes so you stay on the top of what’s happening in the account.

The free version does not send the email

This is how the email looks: 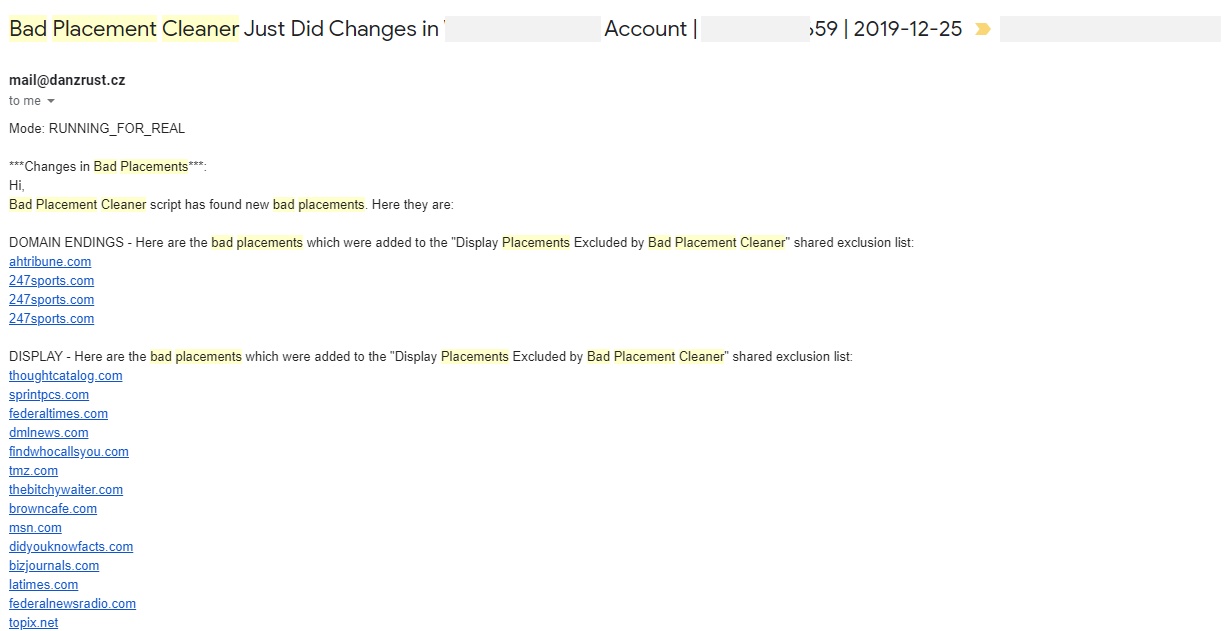 How to Activate the Paid License?

Paid version works on account basis so for each account, you will need to buy a licence. This is the pricing:

The license is not time limited – it will work forever. (at least for now, I may switch to monthly pricing in future but already paid licenses won’t be affected).

Where is the Script Hosted?

After you download the script, you will notice the code quite short – only around 30 rows.

The reason is that the major part of the code for this script is hosted elsewhere. Here is why:

This script is not perfect but it’s the best it can get at the moment. As soon as Google Ads starts supporting Smart Display Campaigns and Smart Shopping Campaigns, I will implement them into the script as well.

Nevertheless, I think even the current version can still save you thousands of dollars or at least hours of manual work.

So please… share this with your PPC buddies and let’s make Google cry for once!